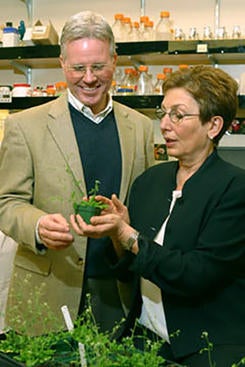 In memory of Neil Campbell, Visiting Scholar in the Botany & Plant Sciences Department for 15 years, and his extraordinary contribution to biology education and research, CEPCEB started recognizing in 2005 the Neil Campbell CEPCEB Undergraduate Student Award for Outstanding Research. This award is part of a scholarship fund recognizing the outstanding research achievements of tomorrow’s young scientists in the areas of plant cell/molecular biology, genomics, bioinformatics, and bioengineering. Dr. Neil Campbell died of heart failure on Thursday, October 21, 2004, at the age of 58.

Dr. Campbell earned his doctorate in plant biology at UCR in 1975; he taught at Pomona College, Cornell University and San Bernardino Valley College before returning to UCR in 1989 where he worked in the Department of Botany and Plant Sciences as a specialist in biology education.  Dr. Campbell is known internationally for his biology textbooks; Biology is the most widely used English-language scientific textbook in the world and has been translated into eight languages.  In addition to a long-history of scholarship, Dr. Campbell leaves a legacy of philanthropy: he earned the status of Chancellor’s Associate as a generous donor to the campus.  He was also named UCR’s Distinguished Alumnus by the UCR Alumni Association in 2001.

The Center for Plant Cell Biology is indebted to Neil Campbell and his wife, Rochelle, for their generous support. We are proud to annually present the Neil Campbell CEPCEB Undergraduate Student Award for Outstanding Research after this distinguished educator and philanthropist.

Find a list of past undergraduate student awardees here.